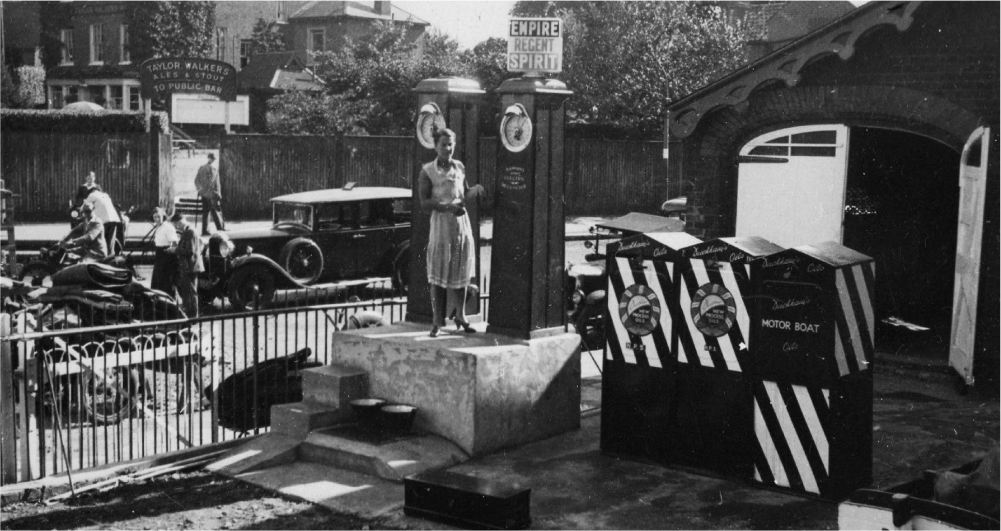 We hope you enjoy a little of the rich history of the Boathouse on these pages, from its nineteenth century beginnings, to its recent transformation into a thriving hub of creative activity: a ‘co-working’ space, with desks available to rent for professionals from the creative industries.

The boathouse was built circa 1850, and its first known tenant was James Arthur Messenger. Living in Water Lane (later renamed Ferry Road) since birth, Messenger was an apprentice waterman (a boatman who carries people by water) to his stepfather for seven years. He then married and started a family, whilst remaining a waterman and embarking on his trade as a boat builder. 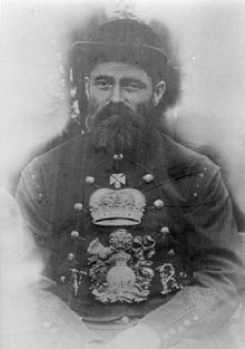 He set up a flourishing business at the boathouse, employing four men and three boys, creating all kinds of small river craft such as rowing boats, canoes and gigs, but also began to gain a reputation for more detailed and special one-off pieces, such as the ‘Lady Alice’. This was an intricately designed boat made in 5 sections (to enable dismantling and portability) designed by Sir Henry Morton Stanley for his second African expedition (below). The commission was secured by Messenger after a meeting with Sir Henry at the Anglers Inn, which, although no longer an inn but a public house, is still sited next door to the boathouse. 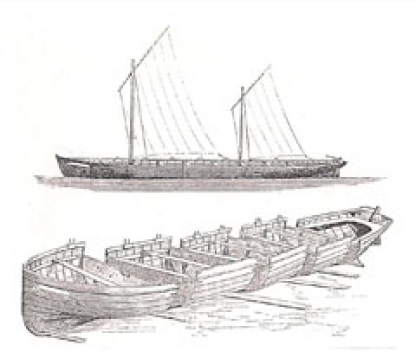 From 1854 – 1857, he held the title of ‘Champion of the Thames’, which later became known as ‘The World Sculling championships’. This competition evolved out of casual rowing races between watermen and boatmen on the River Thames and the River Tyne. The races were later formalised and the first recognised championship was held in 1831 on the Thames. By the mid-nineteenth century it had become the most popular spectator and betting sport in London, and prize money increased dramatically. The person wishing to become champion would lay down a challenge to the existing champion and with that a sum of money, the stake being around £500 for the world title. In today’s money, that is approximately £50,000. Messenger (below) challenged and beat reigning champion Tom Cole, rowing from Putney to Mortlake in 24 minutes and 45 seconds. 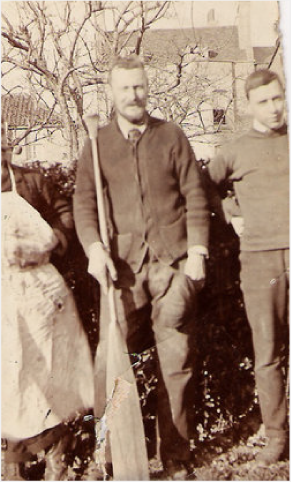 As well as proving himself a top class sculler and fine craftsman, Messenger was made the Queen’s Barge Master in 1862. The Queen’s Barge master was responsible for the Royal Watermen, who looked after royalty travelling on the river, which was their main mode of transport until the mid-nineteenth century. It is a title only granted to the very highest calibre of watermen. He held this prestigious role for many years, from 1862 to 1890. 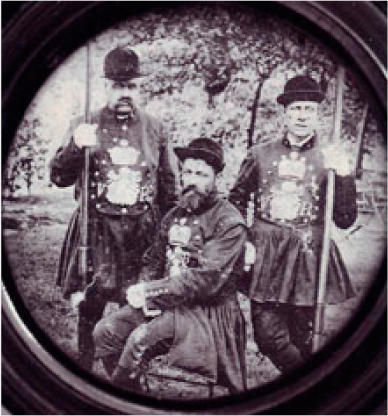 Messenger lived in Ferry Road for most of his life, moving to various properties as his family grew and his business prospered. He had seven children in all with his wife Charlotte and many of his children followed him into the professions of waterman and boat builder. In 1871 the family lived in number 38 Ferry road, along with Messenger’s nephew, who worked as a waterman, and also a domestic servant. At this time business was thriving; he had acquired two more boatyards in Kingston and Surbiton, and was employing around 30 men. His work and craftsmanship was revered and his reputation preceded him: people knew that a Messenger boat was a fine piece of craftsmanship. He also housed the Royal Barge (below right) for a time at the Teddington boathouse, a grand achievement that he was fiercely proud of.

Unfortunately, the Messenger empire was not to continue. In the years to come, due to family tragedies including the death of his wife and eldest daughter in close succession, James scaled down his business and sold his yards in Kingston and Surbiton. His eldest son, who was now Queen’s Barge Master himself and had given swimming lessons to the young royals, died at 48. James moved into the house of his son’s widow, which is where he died in 1901. Messenger left an amazing legacy behind him with a lifetime of achievements on the river which lives on through the boathouse today.

The boathouse was taken over in 1895 by Porter and Brice Boatbuilding Company, which was in business until around 1910. During World War I the yard was used to supply vessels for Thorneycroft’s shipbuilders who had a yard based at Platts Eyot Hampton which was further upstream. 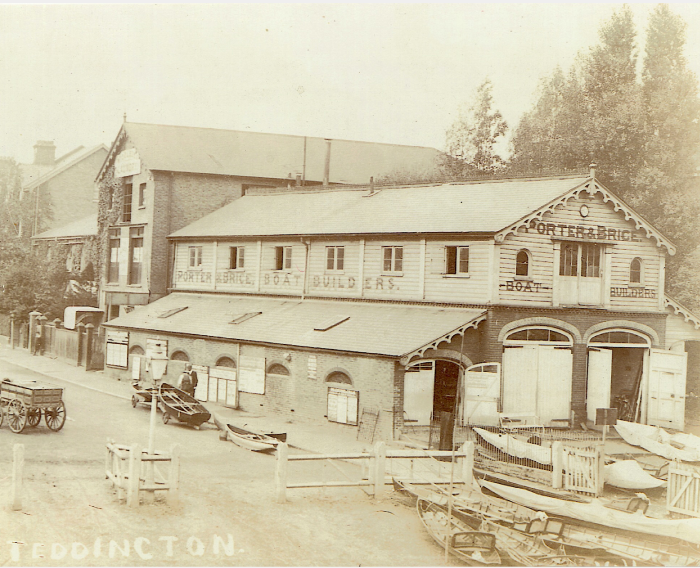 In the 1930’s, the boathouse was acquired by the Tough family, who had a long association with the river as lightermen (operators of a ‘lighter’, a type of flat bottomed barge which can be powered or unpowered) and boat builders. They expanded the boatbuilding business, by creating a chandlery within the boathouse, enabling them to carry out repair works and alterations. They also built the ‘Tigris II’ which was used as a passenger boat providing a service between Richmond and Kingston. In addition they offered winter storage space within the building. 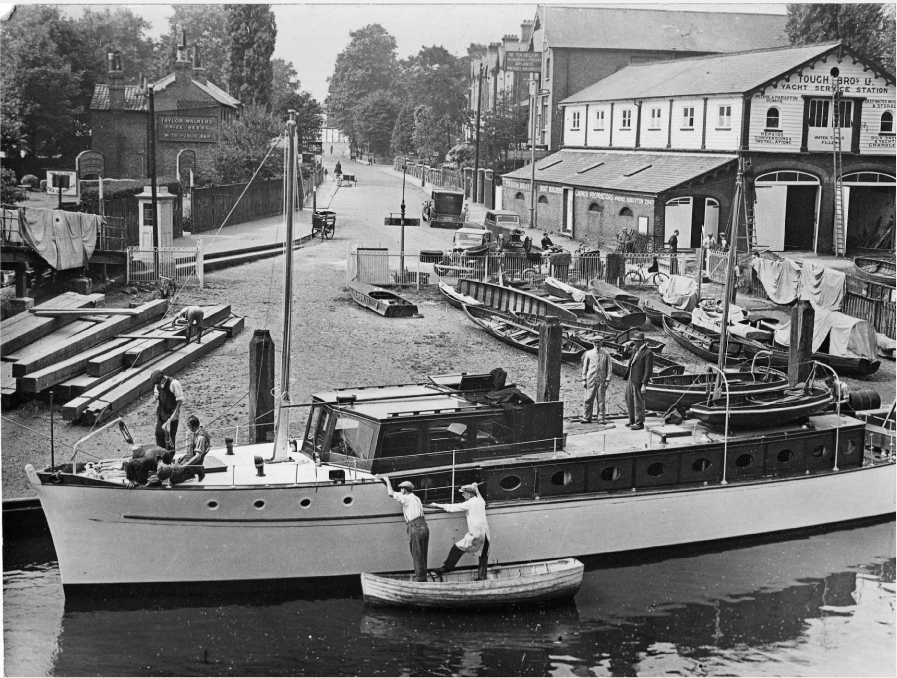 During the Second World War, they expanded greatly. The yard became a muster point for the ‘little ships’ for the evacuation of Dunkirk in 1940, which was organised locally by Douglas Tough (below). At the beginning of the war Tough’s employed 16 men, and by the end this had risen to 220. They built midget submarines, 25 Fairmile craft and various other vessels for the Admiralty. After the war, the yard created many boats for the film industry including a dinghy for ‘From Russia with Love’, three barges for ‘A Man for All Seasons’, and underwater chariots for ‘The Silent Enemy’. 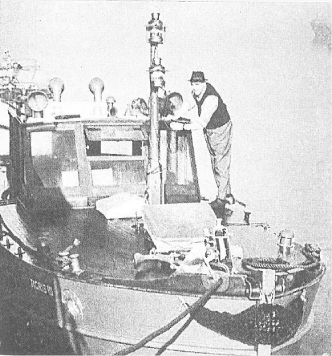 In later years they built ‘The Brave Goose’ (below), a 212-ton yacht which was the largest ever to be built in Teddington. They also built other conventional vessels at this time, such as Thames barges named ‘Thame’ and ‘Nore’. 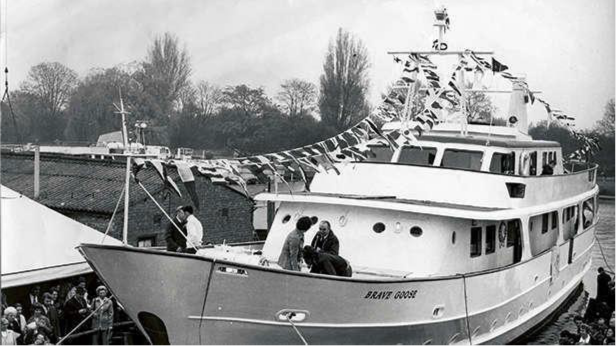 The depression of the 1980s caused a decline in boatbuilding, and that coupled with ever new technologies and developments in other areas meant it was not such a profitable business any more. The boathouse remained the property of the Tough family until 2006, and was used for various purposes such as housing the British Motor Yacht Club. It was bought in 2009 by Architect Matthew Allchurch and Landscape Architect Richard Broome. They settled their companies into the top floor of the building which they had refurbished, remaining true to the building’s original form and structures, highlighting its many beautiful features and utilising artefacts such as old signs and fixtures, lights and boating paraphernalia.

The ground floor, which they were originally using as a storage and warehouse area, has now also been refurbished into stunning office space. The sunlight floods into the two front bays in the morning and there is a sense of calm tranquility created by the proximity of the river and the lock.

Its current incarnation is a great compliment to the boathouse of the past; with its feet still planted firmly in design and creativity and yet brought thoroughly up to date, the Boathouse looks to have an interesting and varied future.